It’s the last flourish of orchids right now and Rudge Hill near Painswick is an ideal place to enjoy this. The flowers of fragrant orchids and common spotted orchids were starting to finish when I visited the site the other day, but pyramidal orchids are in their prime and looking sooo perky. It’s also peak time for meadow flowers and there are more flowers than you can shake a stick at showing themselves off in the sun with the accompanying butterflies dancing around. Added to all this is a fantastic 180 degree view from the top, taking in Painswick, the church, Sheepscombe and into the distance along the Painswick valley. It’s such a sublime site, especially on a sunny day, that I dare you to not to break into a ‘Sound of Music’ moment: you know the one – the opening scene where Julie Andrews runs through the meadow on the mountainside, arms outstretched singing ‘The hills are alive….’. And then you can recover your composure in the fabulous Edgemoor Inn just across the road. So this is 4 star wildlife watching!
The roll-call of flowers is captivating as are their names: fairy flax, rest-harrow, yellow rattle, common scabious, bird’s foot trefoil, heath bedstraw, wild thyme, centuary, dyer’s greenweed, horseshoe vetch, rock rose, milkwort, lady’s bedstraw…I counted over 25 different species in flower the other day. There were also twayblades – one of the orchids but easily missed as it has a flower stalk of small, green flowers. Look for two very broad leaves at ground level – these are the only leaves it has and the flower stalk grows upwards from the middle where they join. The name twayblade comes from the old English words for two and leaves.
You won’t miss the butterflies though that are flitting around everywhere. This hot, sunny weather is ideal for them. To have a good chance of seeing them, visit the reserve earlier in the morning before they’ve had the opportunity to really warm up. Once that happens, they zip about like bikes at the TT Races and it can be difficult to discover what they are as they won’t stay still. Flower spotting sometimes has a lot going for it! I saw marbled whites, meadow browns, common blues, and small heath. I didn’t see the Duke of Burgundy butterfly, however, which is rare now in the UK and declining in numbers alarmingly. Rudge Hill is a perfect spot for them and thankfully they’re flourishing here.

Rudge Hill is such a great place for its wildlife that it’s been designated a National Nature Reserve. It’s been looked after for many years by Natural England and local farmer who’s grazed his cattle there in the autumn for many years and generally given it lots of loving care and attention. It used to be called Edge Common, which some people still call it.

The site is open and mainly covered by umimproved limestone grassland with a cooling copse of trees running along the bottom of the site where white helleborine nestles amongst the undergrowth. To find your way to the Edgemoor Inn, find the Cotswold Way which runs through the middle of the site (there are wooden posts at points along the path which have an acorn and the name Cotswold Way engraved onto them). Follow this downhill and it takes you to the A4173 Gloucester Road and you’ll see the pub on the other side of the road.

When to visit: from early to early July for the orchids and wildflowers.

Location: Rudge Hill is opposite the Edgemoor Inn on the A4173 Stroud – Gloucester road, and next to Edge village. OS Explorer map 179 SO097848

How much time to allow: you can walk a circuit of the site in an hour at a leisurely pace, but allow a half day to fully take in the flowers and wildlife, and to site on the bench at the top of the site and drink in the view. If you’re planning to visit the Edgemoor Inn, add more time still!

Terrain: although it’s called Rudge Hill, the site is essentially a slope running downhill from the top if the site towards the A4173 which borders the bottom edge. It’s a gentle gradient so the paths which run horizontal across the site are more or less level. The surfaces of the main paths are bare earth but there are lots of grass surfaced paths too. The site isn’t suitable for wheelchairs but all terrain prams could manage fine on the wider, main paths. The grass surfaced paths are probably too narrow to fit a pram. Someone who can’t walk very well may be able to manage to walk a little way into the site as there’s a kissing gate at the entrance which they could get through.

Facilities: have I mentioned the wonderful Edgemoor Inn?! It serves delicious food, real ales and the full range of other drinks, plus it has a beer garden overlooking the Painswick valley. There aren’t any facilities on Rudge Hill itself, though there is a small woodland if you get caught short and a ‘wild wee’ is needed!

Directions: either get to the site opposite the Edgemoor Inn or from Edge village.

Edgemoor Inn: drive along the A4173 Stroud-Gloucester road and there’s a  layby opposite the Inn. Park there and you’ll see the Cotswold Way footpath which comes out into the layby. Walk up there to get onto the site and the Cotswold Way takes you right through the middle of Rudge Hill.

Edge village: drive along the minor country road from Whiteshill to Edge (it joins the A4173 just after Edge) and a little way before Edge village is a bus stop on the left hand side. Shortly after this is an informal layby on the right hand side of the road (it has an earth surface, it’s not an official layby). Pull over into this layby and park here. There’s a path through the vegetation which takes you to the entrance gate of Rudge Hill.

Suggested route to walk: there are many paths around the site, but it’s not a big place so you shouldn’t get lost as you can orientate yourself by looking at the view and walking back and forth or up and down the site. The route I walked was:

From entrance gate go straight on – at fork in path, take right hand path – take left hand path at next fork (lots of pyramidal orchids here) – join main path and go straight on (lots of fragrant orchids here) – take left fork in path (lots of orchids further on) – take right path running parrallel to main path) – join another path – turn right to join main path, Cotswold Way goes across path here – the bench is further along the path from this point – follow main path from this point which runs downhill and back round to entrance gate – take a path which runs downhill to take you to the wooded area along the bottom of the site. This is a nice place to cool off in hot weather.

3 pretty fragrant orchids all in a row. C Aistrop 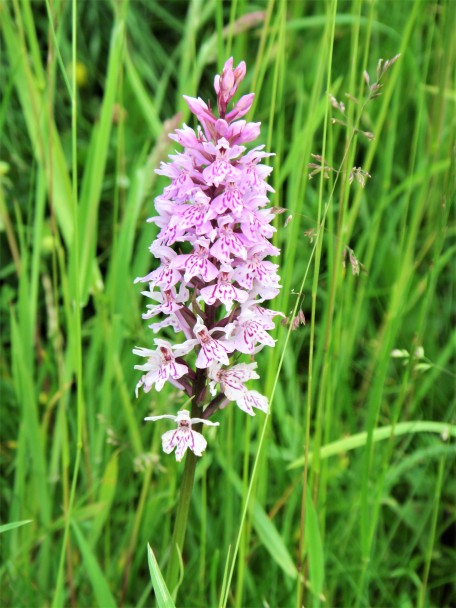 One thought on “Rudge Hill – can you resist a ‘Sound of Music’ moment?”