July is the time of year when nature offers the opportunity to visit a fairy grotto or two. If you know where to go, you can take a stroll at dusk surrounded by lots of tiny, neon green lights that appear as if by magic. I’m talking about the glow-worm, that fascinating creature which seems to belong in fairy tales: invisible during the day yet once darkness falls, it decorates a field with nature’s version of fairy lights.

Why it’s called a worm is a mystery because it’s really a beetle, and only the female glows. She can’t fly so her radiant bottom signals her presence as an invitation to the flying males to pay her a visit – nature’s very own ‘ladies of the night’. Members of the same beetle family that includes fireflies,  glow-worms like to live in undisturbed grassland on limestone and chalk soils. Here their young can find their favourite food – snails which need to live in these types of places in order to get enough calcium for their shells. Old churchyards, old quarries, railway tracks, canal towpaths and old meadows are also acceptable places for them to set up home.

The last three segments of her beetle body contain the chemicals luciferin and luciferinase and when the female pumps air into her body, there’s a chemical reaction which gives off light as a by-product. The light doesn’t look natural to me as it’s a luminous, bright green looking exactly the same as the green flashing lights on home security alarms. In fact, the first glow-worm I ever saw was on the ground right next to a gate post and I honestly thought it was something to do with a security system on the gate! You’d never know from looking at the glow that it’s not just a green blob  but really two stripes and 2 dots at the end of her body.

Glow-worm spotting isn’t for people who like early nights, however, as the females only switch on their babe-magnets when it’s virtually dark. When the dusk makes everything around you appear to be painted in shades of grey, that’s the time to start looking for them. So remember to take your torch with you, and it’s probably advisable to not go on your own. The females will carry on glowing for several hours during the night, only switching off their bottoms once they’ve mated. Sadly, the adults only live for 2-3 weeks and after the female lays her 100-150 eggs, she dies. A brief, but shining life.

When to visit: from early to late July

Location: Bisley Road Cemetery, Stroud. After passing through the entrance gate, follow the path past the area of lawn and head for the lower part of the churchyard where the grass is tall. Then just stroll around looking for the tiny green lights – honestly, once you’ve spotted one, you’ll probably start to see lots. They really are bright green and impossible to mistake for anything else. But please keep to the paths as wandering through the grass will disturb them and other wildlife (the cemetery has been designated as a Local Nature Reserve for the humongous amount of wildlife living there including adders).

How much time to allow: an hour or so as not all the females start glowing at the same time and more will begin the darker it gets. If you’re not worried about ghosts or sleep, stay a couple of hours.

Terrain: the wide paths are surfaced with tarmac and the whole site is on a gentle slope downhill. There shouldn’t be a problem pushing wheelchairs or prams around, and the entrance gate is wide and usually kept open.

Facilities: none, but there are some good pubs nearby such as the Crown and Sceptre on Horns Road, just below the cemetery.

Directions: at the roundabout on the Waitrose end of Dr Newton’s Way where it joins the A419, turn left and then almost immediately right into Field Road. Follow this road past Stroud hospital on the right hand side, then at the cross-roads, take the second turning on the right – Horns Road (where the Crown & Sceptre is) and Bisley Road join the cross roads here to form a V-shape. Bisley Road is the upper road. Drive approx a mile up Bisley Road and then look out for the cemetery on the right. There’s no parking in the cemetery itself, park nearby on Bisley Road. There’s very limited parking space so parking in Stroud and then walking would be better, if possible. 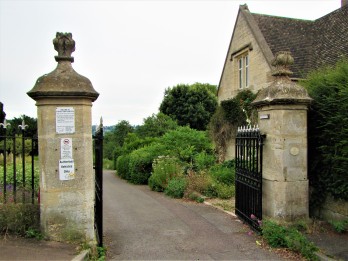 Female glow-worm doing what she does best!