One and a half million of them and not a forked tongue in sight, thankfully. The snake’s head fritillary flower is nationally rare but 80% of what’s left in the UK grows in North Meadow, a national nature reserve at Cricklade near Cirencester. OK, I have to admit that this is nowhere near Stroud. Yes, yes, OK, I admit it’s not even in Gloucestershire but just over the border in Wiltshire. However, this spring spectacle is worth the 45 minute drive from Stroud – there really are hardly any other places in the country to see this and at least one and a half million of them really do flower every year in the meadow. Plus, the best bit is that you’re literally inches away from the flowers as the footpath takes you through the middle of this floral exuberance.

END_OF_DOCUMENT_TOKEN_TO_BE_REPLACED

Spanish v English: the native, English bluebell is on the right, and the Spanish one on the left

The bluebell wood is a phenomenon particular to Britain – believe it or not, 80% of all the world’s bluebell woods are found in the UK! The sight of the glorious violet-bluey haze which carpets many woodlands (especially beech woods) begins in late April and lasts until late-May depending upon where you live. The flowering season starts earlier in Cornwall and gradually spreads up the country with Scotland’s flowers being last to the floral party.

Another bluebell came onto the scene when the Victorians introduced the Spanish bluebell, a close relative of our British one, into their gardens. However, at the beginning of the 20th century, it made the great escape over the garden wall and since then has been popping up in woods, hedgerows, and in roadside verges.

END_OF_DOCUMENT_TOKEN_TO_BE_REPLACED

OK, so we’re in lockdown right now but the sun is shining and the silver lining to the current situation is that’s co-incided exactly with when nature hits the accelerator pedal – forget June busting out all over, from now to mid May is when nature goes from dormant to wide awake. So for the next few weeks, I thought I’d focus this blog on some of the wild flowers, birds and animals that you may see when you go out for your ‘once- a-day-for-exercise’ walks, or even see in your back garden, to help answer those ‘I wonder what that is?’ questions.

END_OF_DOCUMENT_TOKEN_TO_BE_REPLACED 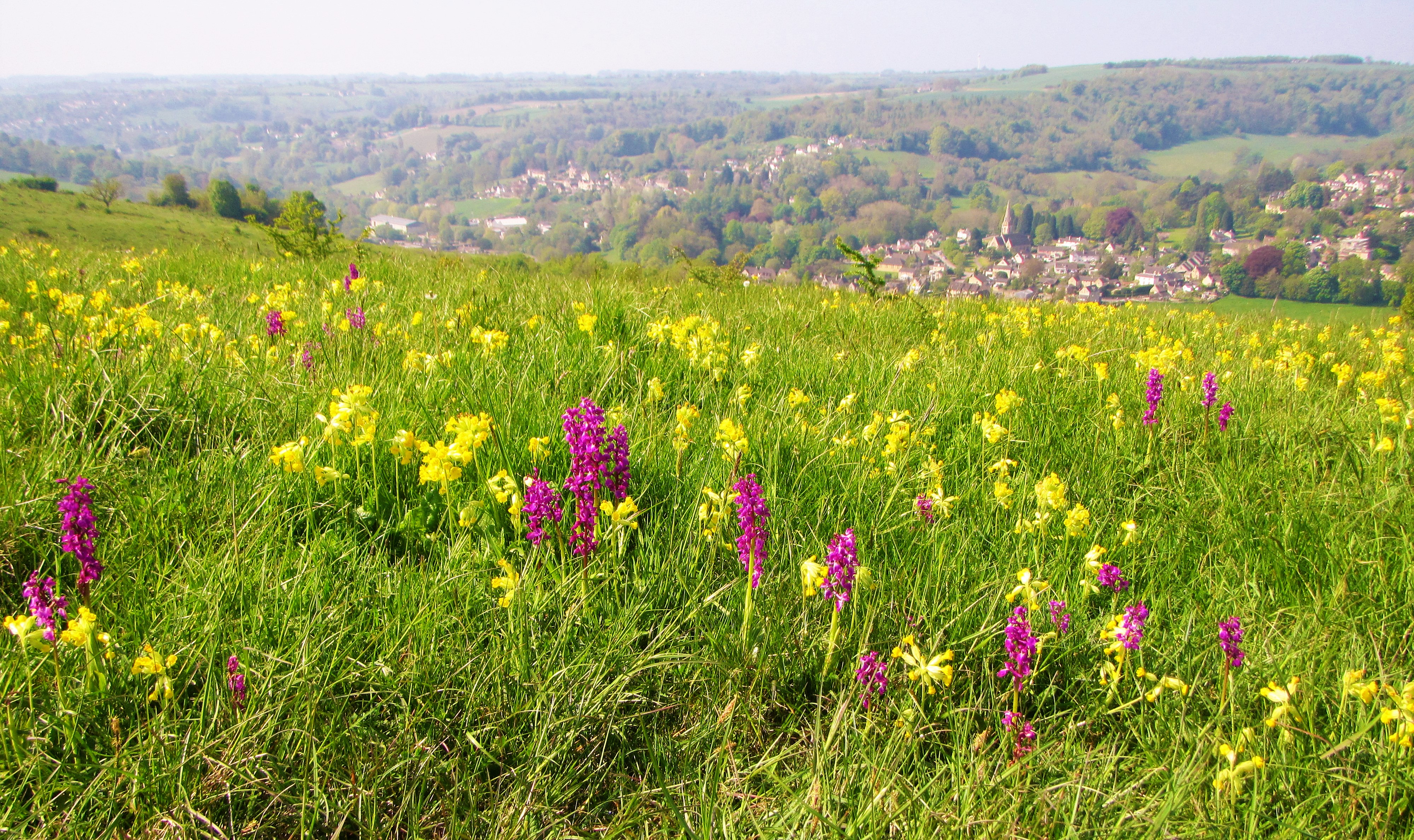 Rodborough common is a popular place for Stroudies to stroll on a Sunday afternoon – thanks to the beauty of the common and Winston’s Ice-cream’s parlour with its enticing range of delectable ice-cream delights. But my hunch is the vast majority of these visitors don’t realise the importance of the common they’ve just walked the dog or the family around, or that they’ve just sauntered past rare orchids.

END_OF_DOCUMENT_TOKEN_TO_BE_REPLACED

The Frome valley must be the closest we have in the Stroud area to a feeling of wilderness. It stretches from Chalford village (near Stroud) for a few miles towards Cirencester and, running along its bottom, the disused Thames & Severn canal offers tiny glimpses into an age of industrial triumph. But its state of decay atmospherically demonstrates how, in the end, nature subtly claims back and subsumes everything. One of the rare bits of human intrusion in the valley is a very welcome one – it’s the excellent Daneway pub, and a return walk from Chalford along the canal towpath taking in lunch at the pub is a popular summer Sunday activity.

END_OF_DOCUMENT_TOKEN_TO_BE_REPLACED

One of the less well-known hargingers of spring, and one of my favourites, is the dainty cuckoo flower. Our ancestors gave it this name to acknowledge it as a sign of the cuckoo’s imminent return to the UK from its African wintering grounds. The pale lilac or pink flowers appear en masse in damp places during April and if they seem vaguely familiar, this may be because the cuckoo flower is one of the cabbage family and has the characteristic four petals arranged in the cross-shape shown by most members of this group. To be honest, if it was a bright yellow colour, it’d look a dead ringer for oil seed rape which is its close cousin. However, cuckoo flower is shorter in height and is a soft shade of lilac or pink so the overall impression is of a refined relative used to the good things in life compared to a brash relative that likes to shout its presence and stomp about a lot.

END_OF_DOCUMENT_TOKEN_TO_BE_REPLACED

I heard a sound  to gladden the heart yesterday – screaming. No, it wasn’t me finding a spider (I have to confess that the long-legged ones make my skin crawl, excuse the pun) but it meant that the swifts have made it back to Stroud for another year. For me, that signals the start of summer despite the grey clouds and cool wind. During my younger years when I lived in the outskirts of York, I never heard this evocative sound as there weren’t any swifts at all. There were oodles of house martins nesting under the eaves of houses all around us, and swallows zipped to and fro, but it wasn’t until I moved to Stroud that I heard this unmistakable sound.  This call has given them the nick-name of Jackie Screamers – if anyone knows why ‘jackie’ is used, I’d be interested to know.

Swifts are the last of the ‘hirondelles’ (the name used to describe the swallows, martins and swifts) to arrive and the first to leave at the end of July. They raise their young in a staggeringly short time of 3 months and apart from landing on their nest to feed their young, they stay in the air. Yep, they even mate whilst flying (don’t ask). A swift has been recorded flying at 69.3 mph (111.6km/h), making it the fastest bird to fly horizontally (peregrines fly faster but that’s downwards when they’re hunting prey). Numbers of swifts seem to be declining and it’s thought that loss of nest sites due to building and development is one of the causes, but there seems to be something happening to them whilst in Africa but ecologists aren’t sure what.

END_OF_DOCUMENT_TOKEN_TO_BE_REPLACED

OK, so the Water Park isn’t technically in Stroud district but it’s not far away and Cleveland Lakes near Ashton Keynes are almost a dead-cert for hearing cuckoos. This part of the park is also wonderfully tranquil, beautiful and offers habitat that we have very little of in Stroud’s valleys and vale apart from WWT Slimbridge. Thanks to the large reedbeds, luxuriant hedgerows and ample tree cover, the air was full of bird song when myself and friends walked around it yesterday evening. We’d only walked for a few minutes and were still close to the car park when we heard the cuckoo calling – what a result! It continued its appeal to any passing females all the time we were there.