One of the less well-known hargingers of spring, and one of my favourites, is the dainty cuckoo flower. Our ancestors gave it this name to acknowledge it as a sign of the cuckoo’s imminent return to the UK from its African wintering grounds. The pale lilac or pink flowers appear en masse in damp places during April and if they seem vaguely familiar, this may be because the cuckoo flower is one of the cabbage family and has the characteristic four petals arranged in the cross-shape shown by most members of this group. To be honest, if it was a bright yellow colour, it’d look a dead ringer for oil seed rape which is its close cousin. However, cuckoo flower is shorter in height and is a soft shade of lilac or pink so the overall impression is of a refined relative used to the good things in life compared to a brash relative that likes to shout its presence and stomp about a lot.

The alternative name of Lady’s Smock, whilst seeming to allude to this air of elegance, may not be as gracious as it seems. In times past, the word ‘smock’ was used in a rather uncomplimentary way to describe a woman and Richard Maybe (in his glorious book ‘Flora Brittanica’ which is a fascinating compendium of knowledge and folklore of the UK’s wildflowers) says this was comparable to the modern phrase ‘a bit of skirt’ and perhaps alluded to what went on in spring meadows. I’ll leave you to draw your own conclusions about the latter! Milkmaids was another name as was fairy flower and may flower (though it usually has flowered well before then), but cuckoo flower seems to be the generally accepted folk name (if you’re in any way interested, Cruciferae pratensis is the proper, latin name).

Just recently, I walked past some lovely clumps of it flowering alongside the canal as I walked into Stroud from Dudbridge. Roadside verges can also be a common place to see it – there are swathes of it growing in the verges as I drove towards Newent recently on my way to the daffodil weekends. Draining our wetlands and damp meadows is the main reason for its scarcity these days. In times gone past it was a common sight wherever the ground was wet – Richard Maybe recounts the memories of a lady who picked armfuls of it whilst a girl living near King’s Lynn, Norfolk, as recently as the 1970s. Hence my excitement last weekend when cutting the grass to find not only a cuckoo flower in the back garden but in the front as well! I always knew my reticence to mow the lawn was due to a carefully thought out wildlife gardening strategy and nothing to do with laziness and dislike of the cold…. 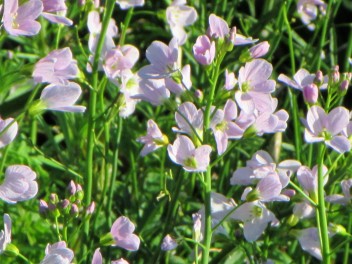 Close-up of a group of cuckoo flowers in the sun. Photo – C Aistrop

Each flower head is composed of many individual flowers. Photo – C Aistrop

One thought on “A delicate harbinger of Spring”