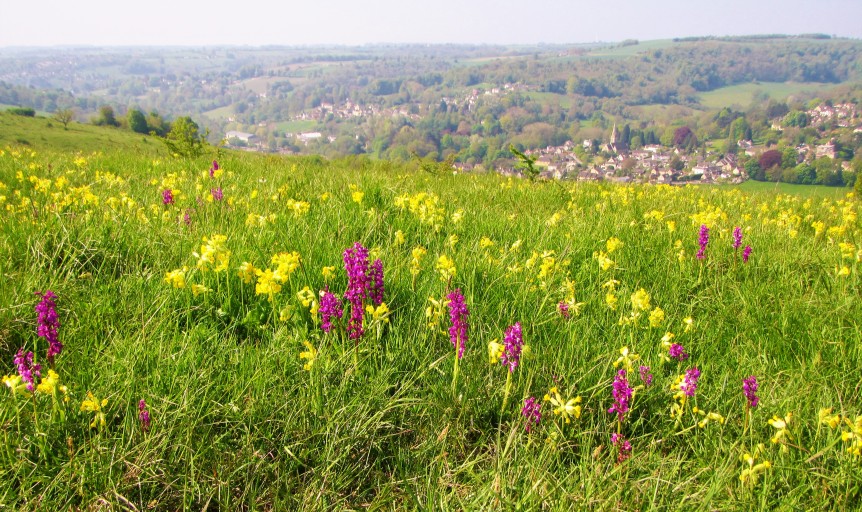 Rodborough common is a popular place for Stroudies to stroll on a Sunday afternoon – thanks to the beauty of the common and Winston’s Ice-cream’s parlour with its enticing range of delectable ice-cream delights. But my hunch is the vast majority of these visitors don’t realise the importance of the common they’ve just walked the dog or the family around, or that they’ve just sauntered past rare orchids.

Rodborough Common is so important for the wildflowers and wildlife that lives there that it’s been given the status of Special Area of Conservation by the European Union. This makes it an extremely important place on a European scale, but it’s also globally important because of most of the common consists of unimproved limestone grassland, a rare wildlife habitat throughout the world. In fact, half of this grassland that exists in the UK is found in Stroud district. It’s also been designated by the UK Government as a site of special scientific interest. Wow, I think all this is something to be proud of and even more so because people can walk around and enjoy it on Rodborough Common. It hasn’t been hidden away behind fences with large ‘Keep Out’ signs.

During the first two or three weeks of May, the special wildlife interest focuses on the early purple orchids and the cowslips, and this year they are stunning with a capital S. They’re tall, intensly coloured and everywhere. My botanist husband has a theory that the orchids, in particular, need a lot of spring rain when they’re growing and forming the flower spikes. Certainly, during the past two or three years when we had dry springs, the orchids were paultry and there were few of them. However, this year spring has been much wetter and the show of orchids is glorious. Not only are they flowering, they are numerous and tall. Plus a number of people have commented to me about how fabulous the cowslips look this year.

The common was given to the National Trust, who still own it, in 1937 by its then owner, the keen naturalist and lepidopterist Richard Bainbrigge Fletcher – big (postumous) thumbs up to him for his far-sighteness. As well as the obvious flowers, the common is also home to 30 species of butterfly and at this time of year, look out especially for the Adonis blue – a stunning, small butterfly with almost electric blue colouring. The National Trust has produced an great butterfly walk route around the common – see it here. This is also a great route to follow to see the best places for the early purple orchids. Winstone’s ice-cream parlour is a short walk on the opposite side of the road to the car parks, heading away from them (it’s a low, wooden-clad building on your left). The area around here is thick with flowering buttercups which, to me, are just as stunning a sight as the cowslips.

So, my recommendation is to get onto the common as soon as possible, have a stroll, enjoy the views and don’t forget to treat yourself to a delicious ice-cream – also a useful thing to motivate and children, young or teenage, to go for a walk (‘keep up children, Winstone’s is not far now, just around the corner’).

When to visit: end of April through into mid/late May (depending on how warm the weather has been).

How much time to allow: it takes an hour to walk a circular route from the car parks and an hour to walk the National Trust route (see link above). But on a sunny day, it’s such a fabulous place that I’d say take a picnic and spend as long as you can. It’s a great place for kite-flying, too.

Terrain: if you park in the car parks, the common is virtually flat all the way round. If you park at the top of Rodborough hill on the edge of the common, it’s a short, steepish path up to the plateau of the common. The paths are mainly earth surface or on very short grass. Please keep to the paths to avoid trampling on the wild plants. Even if they aren’t in flower, they will be growing as flowers appear on the common throughout the summer. An all terrain pram will manage the paths no problem. Not sure about a wheelchair – there is a main track from one of the car parks which runs to a house. A wheelchair could probably be pushed along this or someone with restricted mobility might be able to manage to walk along it. Then you could at least enjoy the cowslips and orchids near the path and take in the lovely view across to Selsley common and to the Severy estuary.

Facilities: Winstone’s ice-cream parlour (have I mentioned their taste tingling ice-cream?); the Bear at Rodborough is a great pub and hotel for drinks, food and toilets. It was a 17th century coaching inn on the main road to London and still retains the oldy-worldy charm. It has a lovely garden to sit in, too.

Directions: take A46 from Stroud towards Bath, and then shortly after leaving Stroud turn left up Rodborough Hill just before the Clothiers’ Arms pub (which is on the left hand side of the road. If you pass it, you’ve gone too far). If you’re driving from south of Stroud on the A46, drive until you’re approaching the centre of Stroud and the Clothiers’ Arms is on your right. Turn right just past this pub.

Carry on up the hill, past the Prince Albert pub on the right (another fabulous pub), over the cattle grid and you’ll see the common begin on your right hand side. Keep going and once the hill levels out, you’ll see a number of car parks on your right. Choose whichever you want, but if you want to walk down the proper track I mentioned above, park in the last one which is set slightly below road level. The track starts at this point.

Cross the road and turn right to walk a short way to Winstone’s ice-cream parlour if you can’t wait for your treat. Or walk with your back to the car parks away from them to pick up the path that runs along the edge of the common. Turn left or right here, and choose where you want to walk. 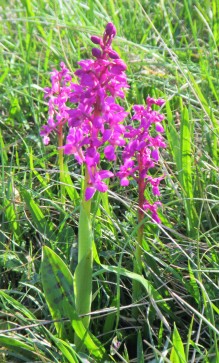 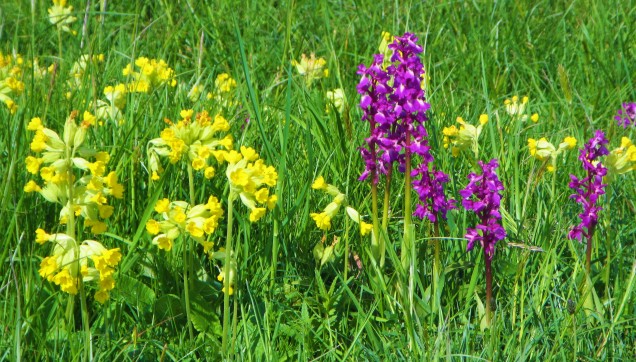