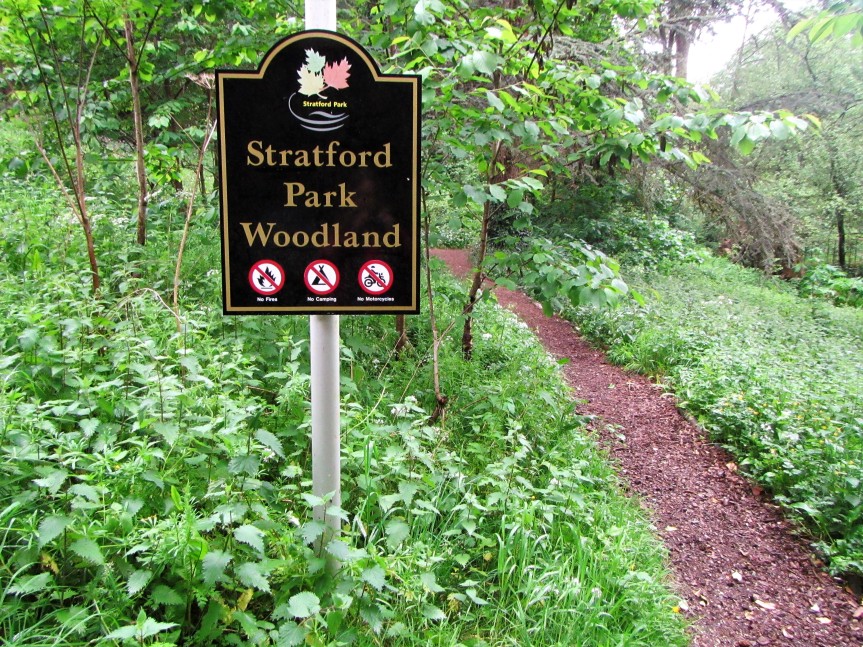 Stratford Park must be the jewel in Stroud’s urban wildlife crown. It has a small area of lovely, more ‘wild’ woodland tucked well away from the formal bit of the park and I’d bet a whole pile of money that most people using the leisure centre don’t know of it’s existence. But in May, the woodland floor becomes covered in ‘spring snow’ as the glorious garlic spectacle erupts and, because of the park’s location and footpaths, it’s one of the easiest to reach and enjoy.

The formal part of the park includes an arboretum of over 800 trees planted during the 1800s and into the 1900s by Joseph Watts, a Stroud brewer who owned the house (now the museum) and the estate from 1815 until his death in 1855, and then his son, Joseph Watts Hallewell. The impressive collection of exotic trees includes Western Red Cedars (the ones that grow so tall that they make you feel inconsequential by comparison), tulip trees, monkey puzzles, Indian Bean Trees and many more. It’s thought that many came from a shared order in 1890 with Westonbirt Arboretum.

The woodland runs parallel to the A46 and will be well known to anyone who takes their children for a ride on the model trains during the summer since the railway runs through part of it. Mainly beech trees grow here with some oak, larch, holly and horse chestnut. The wild garlic covers a large area of the woodland floor and is a great place to see this spectacle if you’ve only got half an hour to spare, or you’ve got kids who’ll be bribed with the promise of time in the formal playground afterwards. Normally, wild garlic flowers during the first two weeks of May but when I visited it yesterday, most of it had gone over – many flowers seem to have come out a week early this year.

The bird song itself makes a stroll through the wood worthwhile as there’s so much of it at this time of year, with a good dusk chorus. A jay flew away squawking and complaining as I entered the wood and other birds recorded here include kingfisher, green woodpecker, little owl, grey wagtail, sparrowhawk and even Mandarin (not a native, it’s originally Chinese but spectacularly gorgeous all the same). A big patch of red campion flowers looked extra colourful amongst the white cow parsley – the deep pink campion is one of my favourite wild flowers.

The Museum in the Park runs occasional guided walks around park discovering its birdlife and trees, plus some sessions with a bat detector as the park’s boasts four species – Daubenton, Noctule, Pipistrelle, and Whiskered. The museum’s website will have details of upcoming dates: http://www.museuminthepark.org.uk/calendar/.

When to visit: the full wild garlic show appears in the Park’s woodland during the mid-two weeks of May (though a mild winter brings that forward).

Location: Stratford Road, Stroud. GL5 4AF, beyond the Museum in the Park.

How much time to allow: the circular walk around the whole woodland takes only about half an hour at a gentle pace. There are offshoots from the path along the top of the wood which lead onto the playing field if you want to shorten the walk.

Terrain: the woodland is on a slope. A few feet into the wood, the path splits into three – the top path is being updated and has a nice, new surface of bark chippings . However, a little way on and the path becomes steep, narrow and bare earth for a few feet – I found it slippery to walk on wearing normal shoes. Beyond this, the bark chip path returns and then splits again just before a small pond on the right – go straight on to reach the leisure centre’s playing field or turn right for a circular walk which returns to the entrance of the wood (the point described above where the path splits into three). This lower path is narrow and the surface slopes to the left, plus a couple of thin tree trunks stretch across the path at one point so, unfortunately, all-terrain buggies can’t be pushed around the route. The first few feet of the top path may be OK for a person with limited mobility and someone to hold onto as you can still see some of the spectacle from close to the entrance.

Facilities: the full range – cafe and toilets – can be found in the leisure centre, and the museum offers refreshments and toilets. The displays in the museum are fascinating and there are special activities for children, so a visit to this + the woodland and park makes a great day out for the family (with plenty of fresh air and no screens!).

Directions: walk past the courtyard entrance to the Museum in the Park, following the path as it turns left past the museum and on round, passing the old structure with arches (called The Orangery) and the path takes you into the woodland just beyond. The ‘Stratford Park Woodland’ sign gives you a bit of a clue where to go.

One thought on “Wild garlic in the heart of Stroud”